On 27th of September, Hoogewerf & Co organized the Diplomatic Council Luxembourg Summit. Below is a short summary of the event:

Francis cordially welcomed all of the directors, speakers and participants to the second annual DC Council Luxembourg Asbl summit 2017.

He spoke about the DC Council Luxembourg Asbl being a non-profit organisation, recognised by the United Nations, with the objective of bringing together Diplomats and Business-people. Further, the DC Luxembourg also acts as a Think Tank and has a Philanthropic Board with the goal of doing good for others.

Noelle thanked SES and the Goeres Group for their generous sponsorship to this event.

Looking at the contemporary atmosphere in the news and media, it is easily noticeable that the present times contain a certain nervosity, fury and anger which effect politics, as well as corporate life, the private sector and private lives. Concepts such as â€œfake newsâ€, â€œfake mediaâ€ are not new concepts, but have always existed since the beginning of the publication of newspapers. Even the dangers of â€œhate speechâ€ have been part of history for a very long time. In order to fight these it would be important to have a codex or a code of trusted public communication which offers guidelines on how to communicate on social and media platforms. As soon as an individual enters his/her opinion in the public sphere, he/she must understand the consequences. In order to avoid society from splitting even further it is essential to teach people social skills, communication skills and editorial skills. It is important to balance criticism with reality and encourage the responsibility of the individual to be able to do a self-reflection before forming an opinion.

The Digital World and the Union of Benelux

Thomas Antoine, Secretary General of the Benelux Union and Former Ambassador of Belgium to Luxembourg

Thomas emphasised on the crucial role diplomacy plays in resolving controversial and difficult problems between countries and communities. Fostering dialogue is essential, because if one side listens to the other, then there is hope that the other side might also be open to listening. If people do not listen, then they cannot be heard. Respect and tolerance are vital, since hate speech is the end of a dialogue and prevents any discussion and argumentation from happening. This prevents people from finding solutions through dialogue.

Concerning the digital world, Thomas said that every silver lining has a cloud, which means that despite all of the benefits of the digitalisation, there are many dangers as well, such as cyber crime which makes institutions like hospitals, power stations, railroads, etc. vulnerable. It is highly important to find practical solutions to not only solve these threats, but also come up with preventive measures to keep these networks safe.

Hang reminded the attendees the importance of diplomacy in todayâ€™s society. She explained that diplomacy is the only â€œweaponâ€ to fight wars and the ambassadors are the light and role models who choose a peaceful way to solve conflicts.

The interconnection of freedom and peace

Jamal spoke about how the Diplomatic Council proposes to the UN to solve difficult and long – standing political conflicts such as the current one in North Korea, Kashmir, (a nuclear flash point between India and Pakistan) and/or Syria. He explained that it is essential to look at the history of the specific regions in order to have a better understanding of why these conflicts have become on-going and very challenging to solve. Looking at the historical events leads us to ask questions such as why would the current regime in North Korea behave the way it is, how come is the regime showcasing such a behaviour towards the American government, how many bombs did America drop on North Korea during or after WWII, etc.

It is essential to understand that even sanctions are an act of war and not all dictatorships are the same. If we take the example of Pakistan, one could say that this country actually prospered under its dictatorships, while other countries might not have. So everything needs to be looked at in a case by case study.

Mgr. Bc. VÃ­t JedliÄka, President of the Free Republic of Liberland

Vit proudly introduced the young country of Liberland, situated between Croatia and Serbia and the Western bank of the Danube river. It was founded on 13th April 2015 and has a total of 7 km2. Their motto is: â€œLive and Let liveâ€, advocating and showcasing respect for all people from different backgrounds and professions.

The country has also started digitalisation in many areas, in order to make things easily accessible for people, i.e. for people around the world who wish to submit their registrations to become Liberland nationals, as well as easy registration mechanisms for companies to register their businesses in Liberland, registration for ships, boats, cars and preparation for the issuing for their own crypto currency, their own Bitcoin. The country also brews its own beer, produced in various different countries and it also has its own airline.

An initial success for the country is the recent registration of a 100 million dollar company.
Liberland is a small country and a big idea.

Beyond Frontiers in a Digital World

Markus talked about the worldâ€™s leading satellite services provided to millions of people around the globe. He explained that the company enables a free flow of data traffic by satellites, video and broadband, as well as being the main driver in the digitalisation behind the scenes, part of the audio-visual sector, as well as in the aero-space cluster.

In the past when the steel sector went down, Luxembourg was clever enough to enter into space. The country went from digging into the earth to digging into space resources. One could say that this country is much bigger in space than it is on earth.

Connectivity through satellites also provides the opportunity to offer help in corners of the world that urgently and desperately need help, such as disaster response with the Air Rescue. Satellites have the potential to reach every part of the world, with their impressive beams and micro-processors. The affordable price of these satellites also allows the connectivity to be democratised which is vital to stay connected to each other.

Hang highlighted the increasing risks around a digitalised world in which it might be possible for the human work force to become obsolete. If the human work force would no longer be needed this would obviously cause heavy job losses in the white and blue collar sector. To prevent millions of people from losing their jobs, it would be essential to have re-training, re-schooling and re-educational programs. It would also be essential that schools prepare the next generation for new jobs and ideally at the level of primary school. The dangers and risks of an increasingly digitalised world should also become part of a political agenda not only a scientific one.

Georges talked about how mankindâ€™s history is full of adventures of seeking new territories in the aim of exploration and discovering new and vital resources. He gave the example of Vasco Da Gama and Christopher Columbus exploring the â€œNew Worldsâ€ and the subsequent immigration of European settlers to these newly discovered territories.

Space exploration and the resulting activity around space mining can be viewed in a similar framework. Scientists have long known the potential of mining materials such as ice/water and various minerals and metals from different asteroids and even the moon.

In the past, space exploration was limited to governmental and/or inter-governmental agencies such as NASA in the United States. Now, there are a number of privatised companies such as Elon Musksâ€™ Space X which have taken a new direction in the field of space exploration, as well as dealing with the potential of space travelling. Luxembourg decided to be part of this exciting activity and to contribute bringing benefit to life on earth. 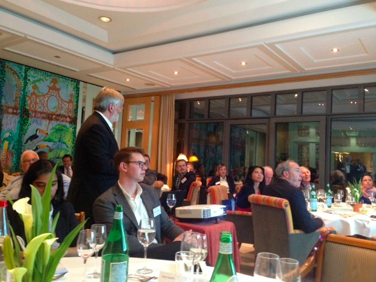 This further exploration of space encourages various business projects, commercial projects, new jobs and the emphasis to encourage the next generation to pursue the STEM (science, technology, engineering and mathematics) subjects.

Induction of Ambassador of Germany as DC Honorary Member